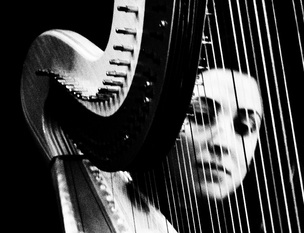 In ‘Felix Godefroid 2003’ international harp competition, she won the third award. She has attended several seminars with (Professors): Susanna Mildonian, Isabelle Perrin, Ghislaine Petit-Volta, etc. She has co-performed as soloist in Chamber Music Concerts of the Greek Composers Union in the Philippos Nakas” Conservatoire and in the `Athens Concert Hall for the “Homage on Manoli Kalomoiri”.

She has given a number of recitals and a soloist performance in “Philippos Nakas” Conservatoire (2004), in the concert hall of Cite des Arts at Paris (2005), with the orchestra of Valerio Boldi in the Cremona, Italy (2006), etc. She has collaborated with numerous Greek musicians and composers in concerts and recordings. Since 1999 Evangelia is a member of “Athens Municipal Orchestra” and since 2007 a member of the “National Opera Orchestra” for the ballets.﻿